Something is happening in the DC extended universe. First of all, we previewed Todd Phillips’ new Joker movie, to an absolute frenzy of anticipation. And now, we cannot lavish enough praise on David Sandberg’s Shazam! What this film proves – alongside the fact that DC might not be quite dying on its feet yet – is that superhero movies and origin stories don’t need to be dark and foreboding in order to get a message across and be successful at the box office. Shazam! is so much fun it’s quite unbelievable, and it’s a really great film, to boot.

There are so many good things to talk about, it seems impossible to find a suitable place to start. This is a film that is lighthearted but motivational; it has a point to make but is by no means saccharine. There are also a good many nods to films that share similar plots and themes, namely Rocky and Big. It’s a really well put together genre piece, that is one of the most refreshing contributions to the superhero canon of late.

If you’re unfamiliar with the story of Shazam! (or Captain Marvel in the original DC comics – the clear conflict of name resulting in the rebrand here) then allow us to sum it up: Fourteen year old Billy Batson (Asher Angel) is a foster kid in search of what really makes him “him”. Little does he know, he is the chosen one, destined to be a superhero – an adult version of himself with powers that are destined to not only help humanity, but to restore his sense of place on the world.

The young adults and kids in the cast are absolutely excellent, more than living up to the gauntlet thrown down by the casts of Stranger Things and It. The idea of family and the malleability of that word in relation to the foster care system is central to the relationships that Billy forms with those he lives with, in particular, Freddy Freeman (the outstanding Jack Dylan Grazer). The most important thing is that all of the supporting cast – from Faithe Herman’s Darla to Ian Chen’s Eugene – are well-rounded, fully fleshed out characters with their own clear personalities. This is often something that is really lacking in superhero movies. 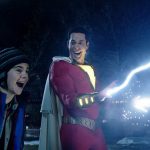 Of course, Zachary Levi is clearly having the time of his life playing this raven-haired lycra-clad hero. He’s flossing, buying beer and shooting “lightning in my haaaaands” at every given opportunity. Everyone wants a selfie with Philadelphia’s latest hero. Levi gurns and winks, acting the teenager, sending knowing nods to the adults in the audience. He is, quite literally, like a big kid. He, too, is a multi faceted character with his own journey … And some wicked one liners.

There is a really great comedy dynamic in the film. I’ve never heard so many cinema goers choke on their Ice Blasts when Djimon Hounsou commands: “Put your hands on my staff and say my name.” There is also some gentle ribbing of genre tropes – for example, when Shazam cannot hear the villain’s final speech, even though it’s supposed to be a “really dramatic moment.”

The villain of the piece – Dr Sivana and his Seven Deadly Sins – is perfectly executed by Mark Strong. He just makes a really good bad guy; purring away his lines whilst barely containing that snarling top lip. He’s a perfect contrast to the bouncy, bright red hero of the piece. And the CGI monsters are a huge improvement on Justice League’s Steppenwolf in that they’re actually pretty scary.

What David Sandberg’s Shazam! demonstrates is that – if DC don’t get too caught up in replicating the tone and style of the Nolan Batman trilogy – they can still make really great films. Superhero need not equal serious. Zachary Levi is the breath of fresh air that the DCEU needs.

I’m absolutely going to see Shazam! as many times as I can and I’d urge you to do the same. I can’t remember the last time I left the cinema feeling so much joy.