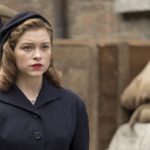 The idea of a “granny spy” seems utterly ridiculous. But, of course, Red Joan, is not focusing on the elderly woman tending her garden. It wants you to think about what the OAP in question got up to during her youth. And, in Joan Stanley’s case, she was passing British nuclear secrets to the Russians during the thick of World War Two.

Based on the real-life case of Melita Norwood, a highly valued KGB spy who was in her eighties when she was exposed, Trevor Nunn’s film is a sedate, no-thrills version of the tale which is barely held together by a solid Judi Dench performance.

Unravelling in flashbacks, in which Sophie Cookson plays the younger Joan, the film details the hazy days of university politics and how easy it can be to become swept up in a movement. Joan is so enamoured by the glamourous, Hedy Lamarr-lookalike, Sonya (Tereza Srbova) and her cousin, Leo (Tom Hughes) that she is almost able to put aside her discomfort with their fervent Communism.

Horrified by the advent of atomic power and the events in Japan, the young Joan decides that she give Leo government documents detailing the development of the nuclear bombs that she has worked on.

It sounds like there should be lots of intrigue and mystery; hushed meetings in phone boxes and midnight knocks at the door. There should be drama, emotion and conflict. Sadly, there is none of this as the film lurches, clunkily, from one flashback to the other. Even Joan’s decision to start secreting documents out of the office seems to stem from one violent outburst of tears.

Everything feels too staged and unnatural. The dialogue is choppy and stilted, with far too many attempts at enigmatic looks beyond the camera. The secrets don’t feel that secret. The characters don’t feel well-rounded; Sonya is a red-lipsticked stereotype whilst Leo is impossibly dull and conceited. Sophie Cookson simply flounces and pouts her way through; she doesn’t have the maturity of a woman indulging in espionage. 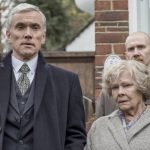 And – owing to the use of flashbacks – Dench ends up criminally underused, barely uttering a line or two in between sepia-toned thoughts of her youth. Had she had more to say, as an older woman reflecting on her actions, it might have been more interesting. Instead, we get misty-eyed notions about “evening out the playing field.” Even when you see her frail character being tagged and man-handled, it is a stretch to summon up some sympathy.

Stephen Campbell Moore and Ben Miles also appear in fairly thankless supporting roles, doing nothing more than swooning over the young Joan and losing their tempers with their elderly mother, respectively.

It’s not a film that’s going to stay with you long after you leave the cinema, which is extremely disappointing for (what should be) a topical spy thriller. Unlike its protagonist, it’s entirely risk averse, right down to the colour palette of dull blues and greys. It varies wildly from monotony to histrionics, with not much substance in between. I can’t help but feel like this might have been initially envisioned as a TV mini-drama, which was eventually cobbled together for the cinema.

Red Joan was not the edgy, slick thriller that I had hoped for. If you’re looking for another Tinker, Tailor, Soldier, Spy, this is not it.