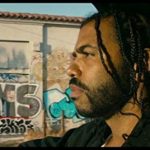 Rap music has long been a platform for aggrieved minorities to express their oppression through a heightened use of language. A pattern of speech that is punctuated by fear, anger and hope for the future; a verbal expression of physical feelings. So it’s no surprised that rapping encroaches around the edges of Carlos Lopez Estrada’s Blindspotting, permeating the script in a slow build that leads to a hold-your-breath-type climax.

The film is written by Daveed Diggs and Rafael Casal, who also star as best friends Collin and Miles, respectively. Collin is on parole from prison, and has to stick to his curfew, hold down a job an generally stay away from trouble until he can fully re-integrate into his old life. There’s just one problem – Miles is a livewire with no fear of physical confrontation, guns or drugs.

Blindspotting was a sort of word-of-mouth hit in the US and is sure to pick up a healthy audience on UK Netflix. It’s intense and bold; funny and shocking. There are many moments throughout the film that will leave your jaw on the floor – some of the visuals are a truly damning indictment of racial prejudices in modern-day America – whilst others will leave you chuckling away.

The syncopation between Collin and Miles – the way the spit beats and move around each other in complete harmony – is truly flawless. Diggs and Casal give intricate, nuanced performances that range between abject anger and tear-stained fear. Their rich and human script is brought alive by their incredible central performances.

The two friends are trying to adjust to the gentrification of their neighbourhood. It’s alien to them to see vegan burgers and kale smoothies alongside lowrider cars and dive bars. This contrast is neatly pointed out in the split screen opening credits and is cemented by the juxtaposition of comic one-liners and the realities of life in a neighbourhood struggling with its conflicting identities.

This is further explained in the Rubin’s vase illusion, as explained by Collin’s ex-girlfriend, Val (Janina Gavankar). You can only see one thing at once – never the vase and the faces at the same time – meaning you will always have a blind spot. In Collin’s case, he is worried that people will only ever see a felon when they look at him – not the man he strives to become. 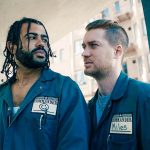 His frustration, that he is bound by strict rules and consequences, whilst Miles seems free to indulge his vile temper and short fuse simply because of the colours of their skin is entirely understandable.

There is a lot in this film that will make you think, whether it’s Collin’s nightmares about his experiences in the justice system or the sight of Miles’ son brandishing his dad’s gun. For me, the most poignant scene – one that didn’t allow me to exhale until it was over – was the one in which a police car crawls along the kerb, shining a light over Collin. Tears brimming in his eyes, he tries to keep a steady pace and, ultimately, avoid becoming another statistic.

The film builds and builds throughout, before bursting into its shocking conclusion. At the start of the film, as Collin tries to readjust to life outside of prison, he stuttered to string a rap together. Now, he delivers one final soliloquy without missing a syllable; the beat like a racing heart. He barely blinks as all of his suppressed emotions and fears erupt from his mouth; one stanza after the other. He’s reclaimed his strength; his place in the world.

Blindspotting deserves a widespread and appreciative audience. It’s well-written and powerfully acted. It’s really rare to have a film make you feel like part of a friendship, whilst also taking your breath away with several bleak reminders of reality.