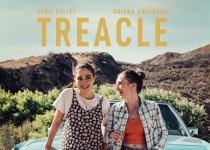 Treacle shares the story of two friends who, after a drunken night end up closer than expected. The film aims to give a voice to the often-ignored “B”, in LGBTQI. This important film premiered at BFI Flare: London LGBTQI+ Film Festival and had its US premiere at Frameline43: The San Francisco International LGBTQI Film Festival.

Treacle’s writer April Kelley is also an award-winning actress and producer. Having trained at Arts Educational, London she then went on to three-year BA at the Academy of Live and Recorded Arts (ALRA), where, in her second year she created Mini Productions. She has gone on to produce BAFTA and BIFA long listed films as well as several BAFTA qualifying films. Most recently, April starred in the title role of critically acclaimed, Annie Waits. The film won and was nominated for several awards including Best Actress and the Rising Star Award. She’s just wrapped on her debut feature, Rose starring Matt Stokoe (The Bodyguard) and Sophie Rundle (Peaky Blinders) – a dark, Gothic exploration of one couple’s relationship.

Director Rosie Westhoff’s first short Crush premiered at BFI Flare and her second Blue premiered at The Scottish Mental Health Festival. In 2018, Rosie won Shooting People’s Short Cut competition and was awarded mentorship from BFI NETWORK & Creative England throughout 2018. Her short films have been selected for festivals around the world, including EIFF, TIFF Kids BFI Flare, LSFF, and Underwire Festival. Her most recent short film Our Sister is funded by the BFI Network and the Tribeca Film Institute.

Treacle was created in collaboration with the Bisexual Resource Center shines a light of BiVisibility and has been selected for over twenty high profile film festivals. The film will also screen at Underwire and has been nominated for Best Actor, Best Director.

Treacle will be screening at The Underwire Film Festival in the UK in September.