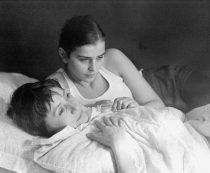 The film introduced audiences to budding young actress Dominique Sanda in her very first screen role, before she would go on to appear in more than forty films. Sanda stars as Elle, a young woman with nothing and everything to lose. A meditation on shared loneliness, Une Femme Douce is a cinematic tragedy of great proportions.

Cinema Rediscovered Co-curator Tara Judah noted “At last year’s Courtisane film festival in Ghent, I saw Robert Bresson’s Une Femme Douce. I couldn’t believe that I had not only never seen this film but that it hadn’t come up in conversation on Bresson, French cinema of the ‘60s and ‘70s, cinematic gaslighting, or the impact of the male gaze.” Returning to the big screen with greater potency than before, as viewed through a contemporary lens of social and cinematic gendered violence, Bresson’s piercing and unforgettable film reveals the prescient impact of the male gaze.

Also touring to select cinemas across the UK and streaming on MUBI in August after its UK Premiere at Cinema Rediscovered is Márta Mészáros’ still-bracingly relevant 1975 drama Adoption (1975, Hungary) presented in a 4K restoration with support from the Hungarian Film Archive. Celebrated as the first Berlinale Golden Bear awarded to a woman, it is a powerful meditation on agency and womanhood in a world that waits to give permission. Now in her late 80s, she is one of few female directors alongside Agnès Varda to have reached prominence in ‘60s Europe.

Gorgeously shot in black and white, with the digital grading overseen by the original director of photography Lajos Koltai (HSC), Mészáros profound feature examines the strain of isolation and the complexities of social emancipation through the viewpoint of a quietly powerful woman.

Check your local arthouse cinema for dates and times for the screenings.