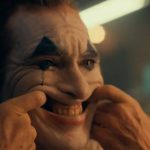 “Are you having any negative thoughts?”
“All I have are negative thoughts.”
One of the most hotly anticipated films of the year just got its final trailer.
Following on from the initial teaser from back in April, Todd Phillips is revealing more intriguing slithers of Joaquin Phoenix’s dark, gritty, Joker.
There is a more subtle, sinister feel to this trailer, with the first one having a more sombre, sympathetic tone. This time,  we get more glimpses of the psychological cracks beginning to show in Arthur Fleck, with a few more hints as to what  pushes him toward a different path. We can also see that this is a man who struggles with mental illness and feels like no one really understands it; a theme that will resonate with many in today’s modern society.
There are numerous shots of Gotham full of rioters in clown masks – is this Arthur’s growing influence or an already ongoing issue that sparks a catalyst for him? Thomas Wayne figures to play a prominent role as well, making a welcome change to the usual depiction of that character, where he and his wife’s murder serve purely as the motivation for his son Bruce to don the Bat-cape.
The whole thing has a refreshing feel to it. It’s doing something a bit different with tried and tested characters
The overall cast is impressive but Joaquin Phoenix is the star here, and he really looks like he is going to knock it out the park with his performance. He’s a master in the art of quietly powerful facial emotions, and just seems to fit the role like a glove.
This iteration of one of pop culture’s most iconic characters is taking a more grounded, ‘real’ approach. This is a true origin story. It’s an exploration of Arthur Fleck, a man struggling to find his place in Gotham’s fractured society. A victim of cruelty and apathy from the surrounding world, teetering on the edge of sanity. It is taking shape as a gritty character study, rather than a balls out comic book blockbuster. It’s what the character deserves and I, for one, can’t wait!
Oh, and that laugh? Phoenix nails it.

Joker is released in UK cinemas on October 4.