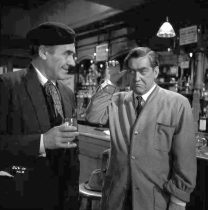 To celebrate the forthcoming restored releases of Tony Hancock’s The Rebel and The Punch and Judy Man, Network Distributing are hosting a very special screening of The Rebel at the Prince Charles Cinema on Monday 23rd September with an introduction from comedian Paul Merton. In the film, Anthony Hancock, a self-taught artist with an enthusiasm that far exceeds any ability, throws in his monotonous office job to live the dream, his genius goes unappreciated by the local peasantry. He decides there’s only one place for his talents to flower – amongst the beatniks and bohemians of Paris.

Having appeared in only a handful of films, sitcom legend Tony Hancock made his first feature film-starring role in the 1961 comedy The Rebel (he was nominated for a BAFTA for Most Promising Newcomer to Leading Film Roles in 1962). This clever comedy from long-time collaborators Ray Galton and Alan Simpson is a witty satire that vigorously ridicules effete pseudo-intellectualism, middle-class pretensions and bohemian artiness.

As a life-long fan of Tony Hancock’s work Paul Merton has enthused that The Rebel is “‘One of the best British Film Comedies ever made.  Now looks absolutely splendid in its pristine technicolour. This is no more than this film deserves”

Following the success of The Rebel, and seeking a more international audience, Hancock split with Galton and Simpson over proposed feature film projects he thought unsuitable for him – one being the unearthed complete screenplay for The Day Off found in Galton’s cellar in 2010. Subsequently he went on to star in his second and final starring role in  The Punch and Judy Man. The plot focusses on puppeteer Wally Pinner (Hancock) is unhappily married to Delia, a gift-shop owner with social pretensions. He is
content to scratch out a living in the faded seaside town of Piltdown but when Wally is invited to perform at the town’s anniversary gala reception, Delia scents a once-in-a-lifetime opportunity to raise the couple’s social standing. Hancock gave a memorable performance in this bittersweet comedy of small-town snobbery and one-upmanship which co-starred Sylvia Syms and featured Barbara Murray, Ronald Fraser, John Le Mesurier and Hugh Lloyd.

Details and tickets for the Prince Charles screneing can be found at  https://princecharlescinema.com/PrinceCharlesCinema.dll/WhatsOn?f=13608899