John Rambo spent the 1980s knifing, booby-trapping, and exploding his way into the consciousness of cinema-goers across the world and the name ‘Rambo’ became synonymous with action-movie excess and emblematic of the entire genre. To mark the latest, and reportedly final, instalment Rambo: Last Blood, we take a look at how Stallone and the character of Rambo defined the 80s action movie genre. 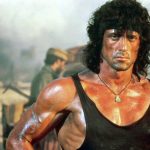 First Blood, Rambo: First Blood Part II and Rambo III are essentially stories of the super soldier – a lone hero who, against monumental odds, takes on all-comers and wins. John Rambo is a soldier, a specially trained veteran of the Vietnam war, but his attitude to authority is not one of disciplined obedience. Rather, it’s his own moral crusade that guides his actions. Rambo doesn’t need the army or any other authority to tell him what needs to be done or help him do it. He’s a one-man army and fighting machine.

Action for its own sake 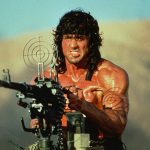 Prior to the Rambo films, the action would have supplemented the dialogue and drove the narrative but all that changed in the 80s. The novel by David Morrell ‘First Blood’, on which the first film was based, was considered unique in the amount of action it contained. The filmmakers didn’t hold back in translating that to the screen and for the subsequent films the action was dialled up to 11! In the 1980s action movie, extended choregraphed action sequences existed for their own sake – purely for fist-pumping entertainment value and largely nothing to do with propelling the plot forward. 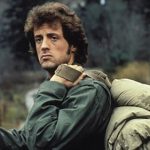 Keeping things simple meant that a Hollywood movie would appeal to an international audience and in the 80s the action movie went global. A familiar storyline of the hero’s quest to defeat evil, minimal dialogue and bucket-loads of action sequences saw the Rambo films become successful all over the world. David Morrell tells a story of a visit to Poland where he discovered that the Rambo character had become a hero to the Solidarity movement in Poland’s fight for independence from the Soviet Union. He was told that protestors would don the Rambo bandana and go out on the streets to demonstrate channelling that rebellious, never-say-die attitude that Stallone captured with the character of John Rambo.

The Reagan-era and the ‘evil empire’ 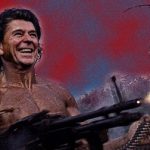 As a new decade dawned, a majority in the US would likely have been relieved to leave the turbulent decade of the 1970s – with the Vietnam war, civil unrest and political scandals – behind. Elected to the presidency in 1981, Ronald Reagan (or ‘Ronbo’ as he was nicknamed) embodied the spirit of a nation looking to big itself up. The aggressive foreign policy of the Reagan-era clearly positioned the US as the superpower with right on its side against the ‘evil empire’ of the Soviet Union. That puffed-up image was personified in the action heroes of the 1980s. Stallone in Rambo II got to right the wrongs of the Vietnam War and its aftermath by returning to the jungle as a Vietnam war hero to rescue POWs and beat the Russians. This was the kind of catharsis that audiences lapped up. 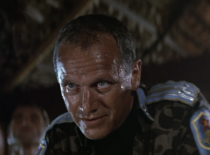 While in First Blood, John Rambo’s nemesis was the home-grown local sheriff, as the series progressed Rambo’s foes took on a more eastern flavour. In Rambo II, in the form of Stephen Berkov’s Lieutenant  Colonel Podovsky, and Rambo III, and practically every other 80s action movie, it’s the Russian’s that are the baddies. The cold war may have been thawing but you can’t keep a good movie villain down. 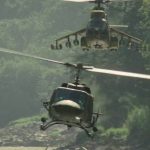 No 80s action movie was complete without a helicopter action scene. That sound of rotating helicopter blades is evocative of nearly all Vietnam war movies (Apocalypse Now, of course) and First Blood was no exception. John Rambo, as a Vietnam vet, knew a thing or two about how to take down a ‘bird’. He starts by aiming a rock at the windscreen and, by Rambo III, he’s shooting an explosive arrow into the cockpit and blowing the whole thing up mid-air. Stallone, director Renny Harlin and the stunt team created one of the ultimate helicopter action scenes in Cliffhanger, featuring some truly terrifying stunts. Our hero swings from a rope ladder in mid-flight and then hangs by a finger nail from the undercarriage to try and stop Qualen (John Lithgow) from escaping in the helicopter.

Things actually got blown up 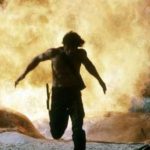 Talking of blowing things up, in the 80s action movie they really did blow things up. Now, saving time and lives, most action scenes are the work of the special effects houses that dominate what we see on the screen.  In a pre-CGI era, the movies featured real on-camera explosions and a lot of them.  Despite the difficulty, danger and expense those SFX teams must have been packed full of pyromaniacs as the explosions got bigger, better and well… more explosive. 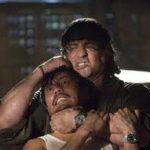 The more people got killed, preferably Russians, the better. First Blood features a fairly light body count, but Stallone was just getting started. Realism doesn’t really get a look-in with this movie genre and it was expected that the super-soldier would take out hundreds of people using just his bare hands, a knife, a bow and arrow or a single automatic weapon, while suffering nothing more than a flesh wound in return (which of course he cauterised and stitched up himself). 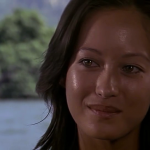 Poor Co-Bau… This young, attractive intelligence agent is sent to help with Rambo’s mission to find the missing POWs in Rambo II. She’s a little bit feisty and disguises herself as a prostitute (PC rules don’t apply) to infiltrate the camp where he is being held captive. She helps him escape into the jungle and a happy ever after beckons but then they are attacked and Co-Bau dies. Women had it tough in the 80s action movie, often only existing to soften the hero’s image after he’s slaughtered dozens of people. Rambo maybe a mass killer but a kiss from Co-Bau shows us he’s in the right. Unfortunately, as with so many other 80s action films, she ends up as collateral damage. 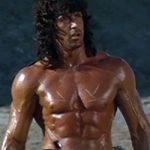 And lastly, let’s talk about the muscles. Arnold Schwarzenegger, Jean-Claude Van Damme and Sylvester Stallone were literally the biggest movie stars of the 80s and no one could follow in their footsteps without hitting the gym first. In First Blood, Stallone is modestly pumped up but as the Rambo films and the action got bigger so did Sly.