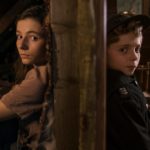 A film where an imaginary Hitler is played for laughs doesn’t really sound like your usual six-time-nominated Oscar fodder. And yet, Taika Waititi’s ‘anti-hate satire’ JoJo Rabbit has achieved exactly that.

Based on Christine Leunens’ book Caging Skies – which doesn’t feature the Fuhrer, imaginary or otherwise – the film is a coming-of-age comedy drama, based against one of the most perilous times in recent history.

The film starts with the German language version of The Beatles’ I Want To Hold Your Hand, featuring a montage of screaming women performing Nazi salutes. This idea that Hitler was revered in the same way – and greeted with the same mania – did make for a few uncomfortable glances around the cinema.

Young JoJo (Roman Griffin Davis) is an ardent member of his local Hitler Youth. World War Two is nearing its demise, but his fervour for the fatherland is still at peak. He lives with his mother, Rosie (Scarlett Johansson), who is less enamoured by the war, and spends all of his spare time practicing defending Germany from the Allies or the Russians.

Whilst the camp, comically accented Hitler (Waititi) is very much played for laughs, the film does pose a rather more serious question: What happens when everything we have been taught to believe turns out to be morally abhorrent? Confronting his entire belief system is something that little JoJo must do, however, as it turns out his mother has been hiding a young Jewish girl in their attic …

What could have been a really twee “ooh aren’t we all the same underneath it all?” type of film, thankfully, never emerges. Waititi forces JoJo to confront his biases and pitches the young hideaway, Elsa (Thomasin McKenzie) as both angry and strong as well as lost and vulnerable. Roman Griffin Davis gives a captivating central performance as he slowly becomes curious about Elsa the person and not Elsa ‘the Jew’. 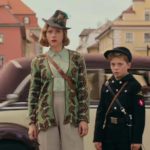 Their relationship, and how they slowly come to rely on each other for various reasons, is truly beautiful to watch as it unfolds. There are some genuine comic moments shared between them, although it never undermines Elsa’s plight.

Sam Rockwell turns in another excellent performance as Captain Klenzendorf; rippling with closeted sexuality and a surprising apathy towards to war. None of the adults in this film – with the exception of Stephen Merchant’s utterly sinister Deertz – are particularly hardline Nazis (presumably to illustrate that not everyone was completely brainwashed or that, by this point in the war, had lost their zeal for the Reich).

Scarlett Johansson is also tender and warm as JoJo’s mother, Rosie. She’s clearly ‘doing her bit’ for the war, as she sees it, and is a real source of life and love for her son in an otherwise deeply confusing time.

Interestingly, the film is rather bright and colourful. Houses are painted the colours of chocolate boxes and the costumes are bright and stylish. Typically, in the war genre, things tend to get swamped in a palette of greys, greens and browns, but Waititi even rebuffs that detail.

JoJo Rabbit is not your typical take on World War Two, and is all the more refreshing for being so. It’s full of life – a real reminder that wars impact people, not just dots on a map.