Like a lot of major cities around the globe, many of Madrid’s inhabitants leave the stifling heat of the metropolis and head to the country and the coast. The month of August sees it deserted of locals with only the tourists to revel in the various outdoor festivities and parties. It is in this setting that The August Virgin, a Spanish film from director Jonas Trueba.

Eva (Itsaso Arana) is at a turning point in her life. She has just turned thirty-three and is reassessing her options. She is bright, intelligent and self-assured but she feels she has to reassess her situation and her life. Instead of leaving Madrid during the oppressive heat of August, she opts to stay and look after a friends apartment in the city.  She has the freedom to settle in and start to spend time in her own company as she tries to figure things out. As the days progress she starts to encounter other people. Some she knew from her twenties and others through random chance.

The film is chaptered by the date from the first of August through to the fourteenth. This structure allows the story to be told episodically while giving you a grounding as to how much time has passed.  The tale itself without this guide would have been a little confusing as the locations and setups could be seen to merge into one. It also allows the filmmakers scope for how the story will unfold. Some chapters are long, even overlapping days as the events go past midnight. Others are very short, sometimes less than a minute as they are the connective tissue between the plot. It also emphasises that no one is in a hurry as the oppressive heat forces everyone to adjust their pace to the temperature. 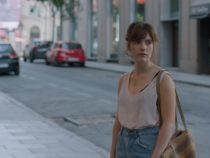 In her meetings, Eva has a number of deep conversations about life and love. By this point, we have already got an understanding of the type of person she is. She is a thinker and someone who is curious by nature. She wants to know more and understand as much as she can. There are two points in the film where this takes on a slightly worrying angle. She sees people that interest her and start to discreetly follow them. it is made clear by her actions that it is not stalking and just curiosity. The first sees her follow an Asian tourist around a museum after spotting her on a tourist bus. She wants to find out more about the tourist and through art appreciation, she thinks she can gain an insight into the girl tourists mind. Nothing more. For Eva, this innocent curiosity, nothing more, and it never goes any further.

The characters presented on screen are all well rounded. There is a depth to them that is obviously the work of the writer. They feel like real people and the way they present themselves is very natural. The dialogue they have with Eva strikes you as being normal things that would ve said and not purely something to progress the story. Even in the scenes of more drama it still retains the same air of naturalism.

For some, the film will feel like a nothing movie in that it takes a good while to not really resolve anything. For me, this wasn’t the point. It was all about being in the company of a person who is trying to sort out a way forward for themselves. It showed that this isn’t a quick process and, as in life, it rarely happens all at once.