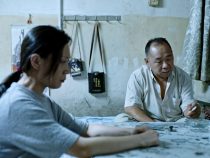 Yan is an illegal second child born during the One-Child policy. To avoid government punishment, Yan’s parents hid their oldest daughter in the countryside and raised Yan as a girl. Now a young adult, Yan struggles with his gender identity.

Hanxiong Bo is an LA-based filmmaker who was born and raised in Beijing. Hanxiong’s latest film Drifting premiered at the 2019 San Sebastian International Film Festival where it was nominated for the Best Short Film Award. Bo’s previous film Haircut was selected by multiple Academy Qualifying Film Festivals such as LA Shorts International Film Festival. Currently being the recipient of the Jack Nicholson Distinguished Student Director Award and the HFPA Directing Fellowship, his working credits include Distant Vision directed by Francis Ford Coppola and Assistant to the award-winning filmmaker Jennifer Reeder. Bo is currently developing his first feature film in L.A.

Drifting was produced by both Lisu Wu and Phoenix Wang. Cinematographer Joewi Verhoeven has worked on a wide range of feature films, commercials, short films, and documentaries all over the world. The Hollywood Reporter made a special mention of his work: “Dutch lenser Joewi Verhoeven’s stellar images – bathed in yellow and blue in the past, and red and green in the present, make ‘Ash’ one of the most beautiful films to come out of China this year, in any genre.”