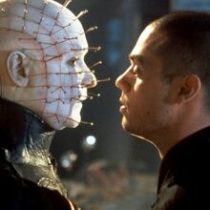 Dawn of the Dead stated that when there’s no more room in hell, the dead will walk the earth. After his death in Hellraiser II, Pinhead walked the earth in Hellraiser III. Now, the franchise boldly goes where no Cenobite has gone before…space. Hellraiser IV: Bloodline is a peculiar film for many reasons. Setting aside the plot – one part prequel, one part sci-fi horror, the production was rife with issues which led to director Kevin Yagher leaving after completion, refusing to do any reshoots or additional scenes. This resulted in Joe Chappelle taking over, his work on the movie altering the plot, tone and ending. Not entirely unheard of (think of the drama surrounding the Snyder Cut for a prime example) Yagher didn’t fight to preserve his vision, instead he fought to have his name removed and replaced with Alan Smithee, a pseudonym giving to filmmakers that want to go uncredited. Seeing that name attached to a movie isn’t a great marketing tool but is Bloodline a bad film?

In 2127, Dr. Paul Merchant (Bruce Ramsay) is the descendent of Phillippe Lemerchand (also Ramsay), a toymaker in 1796 France. He is commissioned to make a puzzle box by an aristocrat Duc de L’Isle (Mickey Cottrell) who uses it to summon the demon Angelique (Valentina Vargas). Fast forward to 1996 and John Merchant (Ramsay, again) is an architect whose latest project closely resembles the Lament Configuration. Angelique sees the family as a threat to Hell, and with good reason as Le Merchand’s descendants look to close the gates forever.

Clive Barker’s original idea for the franchise was for these three timelines to serve as a trilogy of movies. It was ambitious and rejected by the studio however the initial premise is compacted and presented here. It’s a shame that the film had so much studio involvement as at its heart, Bloodline is an exceptionally original slice of horror that would have been a real treat for fans. Instead, consistent tinkering by the powers at be saw fans receive a watered down version of what could have been.

With Angelique the apparent heir to the throne, rewrites saw Pinhead turn up earlier in the script to give the franchise player more screen time. Bradley delivers yet again and his chemistry with Vargas makes for an enticing relationship. Unfortunately there affiliation was to be more violent in nature and reworked to be more appealing to a mass audience, much in the way Joker and Harley Quinn’s was in Suicide Squad.

The most uninteresting segment in Bloodline is when it’s set 1996. Although the idea of Hell in space seemed farcical, it also served as a precursor of sorts for cult classic Event Horizon. Where the film really excels is in old France, it’s also the period given the least attention. Introducing other elements of Hell to contrast with the Cenobites scratched the surface of missed opportunity. This was the last in the series to be released theatrically with the property becoming less of a priority for the studio.

The movie is also notable for giving Adam Scott his first major role in a feature and Joe Chappelle has went on to do quite well. Serving as a director and executive producer on The Wire with one of his episodes, “Middleground”, considered to be one of the best episode of television ever made.

For fans, it gives a glimpse of unfulfilled potential. The appetite to release the Yagher cut is probably less ravenous than for Justice League but if it still exists somewhere I’m sure there’s an ardent fanbase (me included) that would love to see it. A muddled mess at times, it’s unlikely to entice new fans to the series, it is however one for completionists and considering the production issues, a fairly enjoyable watch.