It is always of interest to see a film that has been re-evaluated years after it was classed as a flop and an artistic failure.  was not well received upon its cinematic release in nineteen sixty-six and did not even gets a DVD release until two thousand and three.  Looking back it is difficult to understand why the film was considered to be so poor as the film was an interesting watch and a rather good story.

The story is told as a flashback by the young girl Willie Starr. She recounts the tale of how her home went from a bustling and noisy home to a derelict shell of a house.  Owen Legate (Robert Redford) arrives in Dodson, Mississippi during the early nineteen thirties and takes up residence at the local boarding house run by Hazel Starr. The town has one source of work. The railroad. Everyone who lives in the town has links to it. As Owen settles in he encounters the Hazel’s eldest daughter, the stunningly beautiful Alva (Natalie Wood). A connection is immediately made but comes to nothing as Alva is distracted by a rather rowdy birthday party that is going on all around her. It soon transpires that Owen is in town to make a decision of paring down the Railway workforce. Remember this is the depression. This revelation bring s him into conflict with the entire town and in turn brings him closer to Alva who is looking for a way to escape the small town nightmare she has found herself in.

This was a real surprise to me. I went into it expecting a standard nineteen sixties melodrama but actually got a much deeper and interesting experience. The story is based on a stage play by the superb playwright Tennessee Williams. It was adapted for the screen by a young Francis Ford Coppola in one of his early writing jobs.  The main characters are well written and give the actors plenty to work with. Outside of them the support cast is not so well drawn. The locals including Charles Bronson are left a little one dimensional is they have no real part to play in the unfolding drama.

The leads, Redford and Wood, work very well together. At the time Natalie Wood was the major star having been at hte top of her profession for over ten years. This is arguably her strongest screen role. She plays the part of the gold digging small town girl with relish and is the centre of attention throughout. Redford, in comparison, was not yet the leading man and in this film he gives a very restrained and measured role which is the perfect foil to the larger than life character of Alva. 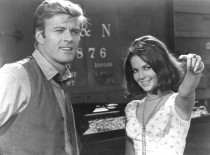 The look of this film is something quite unique. It comes as no surprise to learn that the cinematographer on the movie was James Wong How. In a career stretching over fifty years he was responsible for shooting some of the most visually appealing films including Hud and The Old Man and the Sea. For a superb sequence check out the opening to the nineteen fifty seven classic, The Sweet Smell of Success. Simply stunning. In This Property Is Condemned he uses a number of visual techniques to engage the viewer. Long shots from inside a building, close ups of the main protagonists and two very different pull away shots. Impressive work.

The film was held together by director Sydney Pollack. His attention to detail and the need to tell the story in the most efficient way ensures that he film tells its story in a straightforward, no nonsense way. In only his second feature in the main chair he carries of the task with apparent ease. This film marked the beginning of a successful working relationship with Robert Redford that would produce some classic films from the seventies including one of my favourite films, Three Days of the Condor.

Overall a stylish and absorbing drama which is well worth seeking out. Recommended.

There is no trailer available but the below video gives a flavour of the film.

One thought on “This Property Is Condemned”