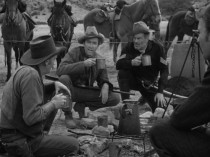 Nineteen fifty was a good year for the main players in the movie Winchester 73. The director Anthony Mann was on a run of form having directed a number of very well received Noir films over the preceding years. The star of the film, James Stewart, was at the height of his popularity having featured in It’s A Wonderful Life, Rope and Harvey in the lead up to Winchester 73. Teaming up with Borden Chase, an experienced screen writer of western films and a good supporting cast the final product was a classic of the genre.

The basic story follows a Winchester rifle as it makes it way from one owner to the next. There is a shooting competition in Dodge City with the rifle as the grand prize. Into town comes Lin McAdam (James Stewart). He is a man on a mission. He is chasing down the man who killed his father, a no good low life called Dutch Henry Brown (Stephen McNally). They both enter the shooting contest with Lin emerging as the victor. Dutch steals the gun and makes good his escape. Him and his men travel deep into Apache country where tensions are high as the battle of Little Big Horn occurred only weeks before. Dutch manages to lose the rifle in a card game and the gun ends being passed to the chief of the local tribe. Meanwhile Lin is on the trail of Dutch.

This is a well paced, all action western. The use of the Winchester rifle to link the various stories is an effective narrative tool.  Each segment links nicely with the next and there are some clever overlaps and call backs to previous characters and plots as the film progresses. The script is tight and economical. There is no superfluous characters or scenes. Everything has a purpose to move the story forward. 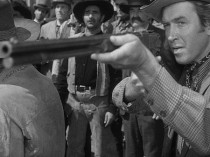 James Stewart is one of those actors who can turn his hand to any film genre. He has an acting style that looks and feels natural. He is perfect in the lead role. His character is determined to gain vengeance but he is conflicted at the same time. Stewart needs little dialogue to convey this. A couple of glances tells the audience all it needs to know. This is a man who has dealt with some serious problems in his life but can still look on the bright side.

The film is notable for early appearances of two future stars. Tony Curtis appears as a cavalry soldier. He has a number of lines and a reasonable amount of screen time for what is in reality a minor role. Also appearing in an even smaller role is Rock Hudson as the Tribal leader Young Bull.

Anthony Mann is not a flashy director. He prefers to let the story drive the film and does not need to rely on camera techniques and tricks to entertain. He makes full use of the panoramic scenery on offer to emphasise the vastness of the country and how small the people are in the grand scheme of things. In a way this film marks the beginning of the western film changing. The themes are no longer straightforward. There are no absolute right and wrongs.

The film is now regarded as the point where the genre started to grow and mature. It is a wonderful film with all round excellent performances. Highly recommended.

One thought on “Winchester 73”