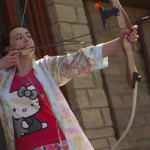 If you’ve ever made a film you’ll appreciate the headaches it can cause. From people stressing you out to technology failing you, certain hazards are accepted. “We haven’t ever encountered any major issues,” insists director John McPhail. Unfortunately for the 28 year old it looks like the Gods of mischief were waiting until tonight to strike. His film company Worrying Drake Productions are about to screen their work but there’s been a technical hitch. The screening was due to start 15 minutes ago and John does not look happy. Not that the packed audience at Cineworld Glasgow minded much. Good things come to those who wait and for those in attendance the wait was worth it.

On the bill was Notes (full review found here), V for Visa, Just Say Hi and the premiere of Doug and Steve’s Big Holy Adventure. The night wasn’t just about showcasing previous work. John announced that Worrying Drake Productions are raising funds for their first feature Where Do We Go From Here? I caught up with John and producer Andrew Lanni on their thoughts so far and what they’re hoping for the future.

Which one of your films are you most proud of and why?

John: I think it’s a toss up between Notes and Just Say Hi – Just Say Hi won 2 out of 3 Virgin Media Awards at the swankiest, most glitzy do I have ever attended at the BFI IMAX in London. However, Notes just seems to keep on trucking. It has picked up so many awards around the world and it seems to get selected to every festival it gets sent to and to top it all off it was my first film.

Andrew: For me my fave is a toss up between V For Visa and Just Say Hi. Again Just Say Hi has done as so well and the way it was made was great. Literally taking less than 24 hours to write, shoot and edit. V For Visa on the other hand is our darkest work and there is something about how far left we went soon after making Notes. Also, John was nominated and won Best Director for V For Visa at the Bootleg Film Festival in New York were it screened in Tribeca, Robert De Niro’s cinema.

Do you receive any financing for your films?

John: My grandfather passed away three weeks before we shot Notes and he left me a nice sum of money. Instead of going on holiday or buying anything I used it to fund all of the films, and to cover the cost of sending the films to festivals, which isn’t cheap and has been the biggest expense of all the films.

What do you think will be the biggest challenge making a feature compared to a short?

John: I think we are an organised bunch and I’m not worried about the challenge of it. It’s a step up and its a step I feel we are all ready for. I do think it will be challenging in the fact that there is a large amount of cast and that there is a large amount of cast on screen at the same time. I’ve only ever had that on Doug & Steve’s Big Holy Adventure and in small sections, so i will be very careful with my blocking.

Andrew: I think the biggest challenges will be the scale of the feature. Production wise, it’s not incredibly different from a short film, however its just on a grander scale. Like John said before we are a resourceful group and are accepting the challenge with open arms. 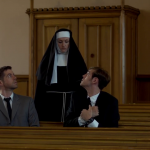 Tell me more about the feature?

John: The concept came from a forty second piece of music Tyler Collins sent me for Doug & Steve’s Big Holy Adventure. I’m extremely influenced by music and this piece was just so beautiful. I listened to it over and over again, it made me well up and all these images just came to me and started making notes. Within a day or so I was working on my first draft.

The film is about James, a 25 year old who works in a care home to be close to his only living relative, his grandfather. His grandfather passes away, leaving him with no family but with three best friends, a compulsive liar called Joan, Nancy, a little girl in an old woman’s body and a highly intelligent mute called Malcolm. With a spark of romance from a new female member of staff, the five of them go on a road trip to scatter James’s grandfathers ashes. The film is full of romance, self discovery, deceit, and friendship.

We plan to start shooting in June, we have estimated it should take about 2 weeks, not including pick ups. Once we have finished in post production, we will do what we have done with the shorts and put them it into competitions and festivals and see what people think, we don’t want to think about distribution at the moment as we feel it has to have a festival run before we can even look at those possibilities.

What was your thoughts on the Cineworld screening?

John: I thought it was a brilliant night, we got great feedback from friends, family, press and industry professionals. We got so many different opinions on the films. It was the first time we had heard an audience reaction to Doug & Steve’s Big Holy Adventure so it was nice to hear people laughing and their thoughts on the film.

I do love how many people have different opinions on V For Visa. Some people came up to me afterwards saying “They haven’t laughed so hard and it was their favourite”. Others said it was their least favourite and they loved how sweet Notes was. This is exactly what we set out to do to show we can make comedy genre films and appeal to wide audience of people.

Andrew: I think the Cineworld screening was also a great opportunity to give something back to the cast and crew and the friends and family who have supported us from the beginning. Its one thing to see your work on a TV or laptop screen but to see it on a cinema sized screen is another. Also, to get the feedback from such a mixed audience is also great.

One last thing, where did the name Worrying Drake Productions come from?

Andrew: The name (laughs). Worrying Drake Productions came from when John was trying to log into his Xbox live account he put in John McPhail it suggested Worrying Drake. Nowhere near John McPhail. John clicked accept by mistake and just kept it. We’ve used it since.

Audience, cast, crew and critic were all in rare agreement. It was a great night enjoyed by all. The feature is definitely one to looks forward to.

More information on Worrying Drake Productions and fundraising for their feature can be found below.

Where Do We Go From Here? Crowd Funding Campaign