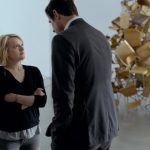 Ruben Östland’s 2017 satire, The Square, won the Palme d’Or at the Cannes Film Festival, with critics and audiences alike enjoying its no-holds-barred swipe at the Swedish art scene and white male privilege. It’s certainly a very stylish film – with more than a hint of absurdist comedy – but it’s a very difficult one to (a) review and (b) decide whether or not it’s actually enjoyable.

Starring Claes Bang (from the most recent BBC Dracula adaptation) as Stockholm gallery owner, Christian, the film takes on huge social issues such as crime, prejudices, middle class altruism, social housing, misogyny … The list goes on. It really is a takedown of pretty much everything going on in contemporary Swedish society.

The film opens with Christian getting his wallet, phone and cufflinks swiped by a double act who pretend to be having a ferocious argument. Despite the fact that he could easily afford to replace the items, he embarks on a quest to retrieve them (in his Tesla) from an extremely poor housing scheme; the wealth gap laid bare, front and centre, in case you weren’t getting it.

Besides this, Christian is also working on a new installation for his gallery – The Square in the film’s title. It is supposed to create an altruistic, safe space for those who visit it, as no one who stands in The Square can be refused help – whether they need a meal, a few kroner or simply a shoulder to cry on. If the gushing sentiment behind it doesn’t set your teeth on edge, simply wait to see how it is marketed to the public. Östland really goes in big for the shock factor here.

Elisabeth Moss is criminally underused as the needy journalist, Anne, who is somewhat obsessed with Christian. There is a grim scene discussing the disposal of a used condom that puts Christian’s conceit on full display, as well as hinting at Anne’s unhinged nature. Oh, and she also has a pet monkey loitering about her apartment. As you do. 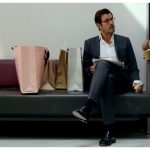 The film is peppered with shots of people sleeping rough, or beggars asking for spare change or food. They are usually of Eastern European descent, and Christian’s character flits between mild disgust and overwhelming generosity. Like I said, the film really does like to put a big flashing sign above the points it’s trying to make.

There are plenty of scenes of dark humour – the hoovered up art exhibit, the display of creaking chairs, the angry chef who just wants people to listen to his menu – but it’s not enough to hold the rest of the film together. And, the reality is, at times this really does feel like a series of scenes that are tonally inconsistent and not necessarily connected.

The one scene, however, that I am sure grabbed plenty of attention at Cannes, involves performance artist Terry Notary, who delivers an extremely uncomfortable turn as a Oleg the ape man. The scene literally does not feel like it’s ever going to end and is almost unbearable to watch – especially as things get out of hand and no one intervenes. There was probably another metaphor in there about social inequalities, but I probably missed it as I was cringing so much, I could barely watch.

The Square feels like it gets lost in its own message. There is so much going on that I guess it’s hard for it to really home in on a few key messages. None of the characters are particularly likeable – although, that in itself, may be the point – and there is far too much signposting of the points it does actually manage to make. We get it – there’s a wealth gap and the art world is crazy.

I enjoyed certain elements of this movie, but I can’t say I enjoyed it as a whole. It tried to achieve too much and definitely lost its way. Which is a shame, as I have huge admiration for Elisabeth Moss and I thought Claes Bang made a thrilling Dracula.

The Square was shown on Film 4 as part of their Movies at 9pm series.