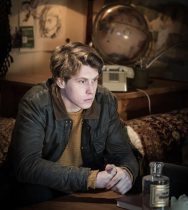 Part of the pleasure of watching and reviewing films is getting the chance to see something that really sparks an interest in you and makes you appreciate the art form afresh. The medium of short film is by far the best way to find this. Short films carry out two main functions. They act as a calling card for the film maker and their ambitions. More importantly they distill cinema down to its essence. The chance to tell a story.

As part of this year’s Loch Ness Film Festival the moviescramble writers were given the task of judging the entries for the prizes of best comedy and best film. Of the nominations, Infinite stood out as being something special and it was rather easy to give it the best film gong.

A young man, Sid (George Mackay) is facing death square in the face. Having received the final prognosis he decides that he wants to have a send off with his closest friends. Not for him is the fulfilment of his bucket list. He wants something a little more personal. He gathers his four friends together to map out his plan. To each he gives a piece of paper with a word on in. The word represents an aspect of their lives that define who they are as a group and why they are friends. Each person has to find something that represents the word (home, family, love etc.) and place it on a bonfire. The idea is that by burning these symbolic items it will release the memories and feelings into the atmosphere, where it will stay forever. 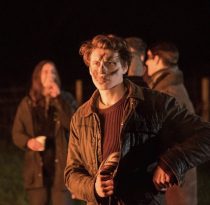 It is a very serious subject matter and not one that film makers usually turn to for a short film. Death, illness and loss are staples of modern cinemas output but it is rarely done well. Infinite avoids the usual pit falls by focusing on the characters rather than the subject. The film is seen through the eyes of the main character Sid and how he is dealing with the situation. It is a complex character study that is brought to life by a superb performance by Mackay and a script from writer / director Connor O’Hara that allows Sid to express how he is feeling and coping.

It is very true that there is so much more to story telling than just dialogue. Here more is expressed through actions or expressions than by the exchange of words. Sid comes across as being a person who is accepting of his fate and holds no bitterness to anything or anyone. He calmly goes about his tasks in preparation of the bonfire and is clear in his own mind about just what he is doing. Rather than being selfish and making himself the centre of the attention he is at pains to make sure everyone is happy and supported during a time that is difficult for all.

Music is used to great effect here. There are several pieces of music used to heighten the mood during the short fifteen minute run time. A good score can make all the difference to a low budget short film as it adds an extra dimension. Here the opening strains of the opening track under the image of the gang messing around at the bonfire sets the tone for the rest of the film. It is subtle and effective as it sets a high bar for the rest of the film and in a way challenges the film maker to maintain that standard. Which he most certainly does.

Overall, a fantasically entertaining short film on a subject that is not easy to convey effectively on the screen.