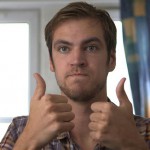 What makes Notes stand out from the standard “boy meets girl” romantic comedy is pivotal to its story. Yes the lead characters spark up a romance only for it to look doomed which leads to a will they won’t they third act before the inevitable climax, but if it isn’t broke…add something a bit different.

Writer/director John McPhail adds in a twist to the concept in that boy hasn’t met girl.

The premise has Adam (Tyler Collin) sharing his living space with Abi (EmmaClaire Brightlyn). As a result of their conflicting sleep patterns the pair communicate via post it notes. What starts off as complaints about each other soon develops into flirtatious messages. We then follow the would be couple as they tell their friends about the potential love interest they’ve (not) met.

Based on a specific instance in McPhail’s life, the film explores the themes of love and companionship for the 21st century. In the digital age, many couples find love online before ever coming face to face. Although the idea isn’t entirely original (Sleepless in Seattle) it’s still refreshing to see something different in the current rom-com genre (and one that doesn’t star Jennifer Aniston).

The casting is excellent as the two leads breathe life into their roles. The actors are also naturally likeable which helped me care whether they get together or not. The director and actors’ ability to maintain the chemistry between the two leads who spend little screen time together should be commended. 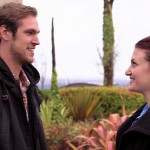 Some short films leave you wanting more but this isn’t the case with Notes, not that this is a criticism. Instead McPhail has crafted a story that slots perfectly into the short film genre as the film’s modest running time compliments it greatly. In less than 10 minutes, McPhail has achieved what many feature films can not. A touching romance with a genuine humour to stop it from being too schmaltzy.

Part of an intended trilogy along with producer Andrew Lanni, it will be interesting to see what else the guys have in store.

Our interview with the John and Andrew can be found here.