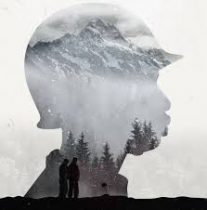 As a review site we have been in the really fortunate position of being able to cover and support local Scottish film makers as they hone their craft develop their scope and bring more and more ambitious projects to the screen. One such talent is the director Johnny Herbin. One of our first short film reviews was his 2012 film Mugging for amateurs, a comic tale of bungling hold up artists was a delightful piece of work that showcased the talent on both sides of the camera. This was followed up by the multi award winning short electric faces that again highlighted a comedic side to the business of crime. Now, Johnny and his regular collaborators have returned with the ambitious conflict set drama, Mountain.

Set during the Second World War, three American soldiers find themselves behind enemy lines and on the run from an unseen enemy who never seems to be very far behind them. The soldiers, in their desperation, try to throw off their pursuers by going to higher ground. From there it is a game of cat and mouse with the highest stakes.

The film makes you take notice from the very first image. Shot in black and white it has a very distinct look that draws you in before anything actually happens. What it does is to strip away any distractions from the telling of the story. It forces the audience to pay attention on the detail and does away with any distractions. This is a clever choice in that by concentrating the focus of the film it actually gives the film makers a lot of scope in how they build the tension and then confound expectations based on standard movie tropes.

The other major choice in the story telling is in the use of dialogue. There is no on screen verbal interaction between the protagonists. All of the exposition, reliable or otherwise, is presented via a voice over from the main character of Knowles. With this method we only get the perspective of one soldier and it is his thoughts and actions that we come to rely on whether they are accurate or not. While you are inclined to trust him it is always apparent that the narrator is not in the best place in terms of his mental health due to the pressure of the situation. This choice pays off in the final moments of the film when everything comes together.

Due to the choices noted the central performance from Wan Siluka Jr, had to be particularly strong. It is a physical performance that has to convey the emotion and the trauma facing a young man whose resolve is being tested constantly. You get a real sense of how the character’s resolve and hope is chipped away by the ongoing chase in a barren and unforgiving landscape. For a place chosen as a sanctuary it becomes apparent to him that there appears to be no such respite for him or his comrades. The mountain becomes a barrier between him and a way home.

Mountain will screen at the 2019 Loch Ness film festival.