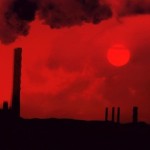 Saturday’s screenings kick of at the Craigmonie Centre with a two hour short film block. Twelve is a moody thriller that is unsettling due to its lack of music, the silence between dialogue creating the ambience. Red Dust looks at the alleged link between Ravenscraig and high numbers of cancer cases in the surrounding housing schemes. It’s a powerful documentary that accuses MPs of being complicit in the wellbeing of the health of residents. The term Scotland’s shame is overused; it’s a fitting title for the events that transpired here. Essential viewing. David Gave’s horror Dystopia ST channels the twisted imagination of David Lynch via Alex Chandon. A disturbing short that is visually stunning.

Vampires are at the forefront in Friday Night Saturday Morning as a skinhead hunter battler the undead. Moody and action packed, the short feels like a teaser for a full length idea. They say your life flashes before your eyes when you die, but what if your life wasn’t that interesting? That’s the premise for Highlights, when an angel travels back in time to improve the life of the most boring man on earth. More sci-fi in Situation Vacant as a young woman regrets going for this job interview.

Silent rom-com Rush Hour is a warm tale about a destined couple who flirt back and forth through the lonely hearts ads in the newspaper. Are the ads intended for each other though? Animation makes its first appearance of the day in the form of Vincent Black Lighting, a tale of love, motorbikes and a red-headed girl. It is followed by another animation, Redman. King Macbeth faces his darkest hour, battling personal demons in the face of an invading English Army headed by the usurper Macduff. The comic book style is reminiscent of Frank Miller and allows for more to be done while battling with budgetary constraints. A gripping drama that had me hooked from the start until its bloody end.

Broken Record is a cautionary tale about the true value of friendship and loyalty with a humorous spin. When Fraser and Tam find a box of old records they believe they’ve found vinyl gold. They soon find however, that not everything is as it 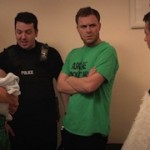 seems. Closing the afternoon block is Gabriel’s Robertson’s Bucket. A devastating revelation drives a man to suicide however the discovery of an abandoned baby forces him to confront and work with his former best friend and new enemy. The script displays a twisted and dark wit, with surrealist set-pieces that keep the humour flowing. David Elliot and Paul Brannigan star.

A break for dinner and it’s time for the second block. A huge crowd arrives for the evening films, starting with Peat Reek. A young Customs and Excise officer enters the highlands in the beginning of the 19th Century, in order to prevent and reduce the illegal distillation of unmatured whisky. His honour and integrity are tested as he stumbles across a community heavily involved with the unlawful trade. Roger & Reid: End of Message is an experimental art house project that raises a few eyebrows. It is followed by the more accessible Top Oats, a documentary following two top porridge makers, both former winners of the coveted title of “World Porridge Making Champion”, as they make their way to the 20th annual World Porridge Making Championship. Funny, engaging, and a lot more interesting than you may expect.

A Day At Maker is a short film to show what happens on a day to day basis within the Makar office and workshop before the prefabricated panels are transported to site. It’s short runtime combined with quick edits and enjoyable soundtrack make this a surprisingly pleasing considering the synopsis. Australian comedy Best Before explores a unique alternative to fertility treatment. Approaching 40, nursing home worker Grace is bitterly aware that her biological clock is ticking. The lengths she goes to aren’t for the squeamish. Comedy continues in Ro J. Goodwin’s Din Dins, as an elderly couple experiment with that night’s dinner. Starring Goodwin’s own parents, they have a natural comic timing especially his father.

Andrew and William Doig use the opportunity to showcase their latest short, The Loch Ness Committee. A secret mafia works in the shadows to ensure the myth of Nessie is kept alive in this lighthearted, although violent comedy. Let’s do the Cat Dance explores the obsession with internet sensations as a struggling writer creates the new Gangnam Style…with the aid of a toy cat. Bernard the Great is an off-the-wall tale of a young man that invents a suit to 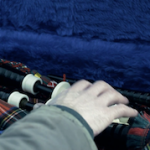 stop him growing. He soon discovers that there are easier ways to not grow up in this heartfelt comedy. Iain Forbes The Last Piper rounds of the day. A bizarre thriller that finds Ryan MacCrimmon, guardian of the last set of bagpipes on earth and his quest to prevent them from being destroyed by a mysterious group intent on making the instrument extinct. Granted it’s an acquired taste, but this seems a little extreme. Superbly crafted and unique, it provides a fitting end to the night.

The last day saw the return of the Guerrilla Filmmaking workshop. The rain prevented much outside shooting, but the kids had a blast running riot in Abriachan Hall. The final films of the festival were the results from last year’s workshop. Who knows what next year will bring?

It was time for the annual barbecue before packing up for the year. Everyone congratulated each other on a job well done, with William lying collapsed on the floor of exhaustion. The festival grows from strength to strength with each passing year. First, a well deserved rest for all involved is in order.