Nowadays it’s hard to believe that the Chucky films were once considered “video nasties.” The third installment in particular was blamed for the brutal murder of toddler James Bulger and reportedly banned in the UK (it was still available however 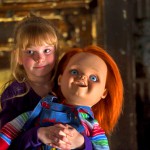 many stores refused to stock it and broadcasters stopped showing it on TV).

Bride of Chucky  introduced a more comedic tone into the series with Seed of Chucky continuing in that trend. Curse of Chucky will see the Good Guys Doll go back to his horror roots.

Writer (of all Chucky films) and director Don Mancini explains, ” I think what we are mainly responding to, David (Kirschner producer of all Chucky films since) and I, is the will of the fans, which is really telling us that they want to see a scary Chucky movie again. They want to go back to the straightforward horror rather than the horror comedy.”

Further distancing istelf from it’s humerous predeccosrs, the film will not be a continuation in the series. Chucky fans can at least take comfort in the knowledge that the filmmakers aren’t making an error of A Nightmare on Elm street proportions as Brad Douriff will once again be voicing the homicidal doll.

“Who would you get that’s better? I mean with Chucky so much of it,” Mancini continues, “and David and I talk about this a lot, that because he’s a puppet, there’s an aspect of him that feels like he’s an animated character, so his voice is such an immense part of it as well as what he looks like. It’s almost like recasting Homer Simpson or something.”

Curse of Chucky will be the first in the series to not secure a cinematic release. It will out on DVD on October the 8th this year.