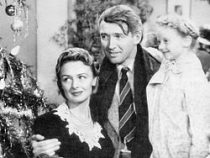 Just in time for the forthcoming festive season, Park Circus have announced the return to the the big screen of three classic Christmas movies. Whether you think they all are seasonal films with the inclusion of the best of the Die hard season is a recurring topic of discussion, but nevertheless it cant be argued that all three are top notch entertainment.

It’s a Wonderful Life will be back in cinemas across the UK and Ireland in a glorious new 4K restoration throughout December. James Stewart is George Bailey, a man whose attempted suicide on Christmas Eve gains the attention of a guardian angel, Clarence Odbody, who is sent to help him in his hour of need. Whether audiences are experiencing It’s a Wonderful Life for the first time, or it is a perennial festive family tradition, this new 4K restoration will make it a truly special occasion.

Next up is 1988 genre-defining action classic Die Hard, starring Bruce Willis and Alan Rickman. Considered by many as the quintessential action movie, Die Hard will celebrate its 30th anniversary with screenings at cinemas from 7 December across the UK and Ireland, and in selected international territories. The employees of the Nakatomi Corporation have their festive soirée interrupted by the arrival of a group of well organised, well-armed – and well-dressed – criminals headed up by a charismatic mastermind who starts making terrorist demands and performs a little corporate restructuring with devastating consequences. To complete the trio is 1990 Christmas comedy caper Home Alone, which introduced Macaulay Culkin for the first time, as Kevin, and which will screen at selected cinemas across the UK and Ireland from 5 December.

All Kevin McCallister wants for Christmas is for his family to disappear. So, when he wakes to discover that they have accidentally left for their Christmas trip without him and that his wish has come true, he does what any kid would do – he parties! But when he learns that two burglars with a Christmas list of their own are working their way up the block, he is forced to defend the family home. Perfectly paced, with a brilliant cast anchored by a shining performance from Culkin, Home Alone is both funny and touching, with something for everyone of all ages.