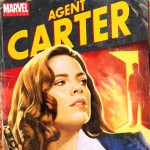 Ahead of the premiere of Marvel’s Agent Carter we are treated to another peek at what we can expect from the much-anticipated series. In the clip, Carter (Hayley Atwell) and Howard Stark (Dominic Cooper) are having a discussion that could possibly shape the course of the series.  We are introduced to Jarvis, the trusted butler of Howard Stark, who will do doubt play a significant part in the adventures of Carter and her team.

Agent Carter will premiere on US television on the sixth of January.